Suzana Milevska: First Person Plural: The Clusivity of „We“

The question what are the implications behind the use of “We” when it is used by the non-immigrants and non-refugees bothers me for a long time. More precisely, I want to discuss the difference between “saying” and “doing” in the use of the first person plural, or who is included and who is excluded from this statement. 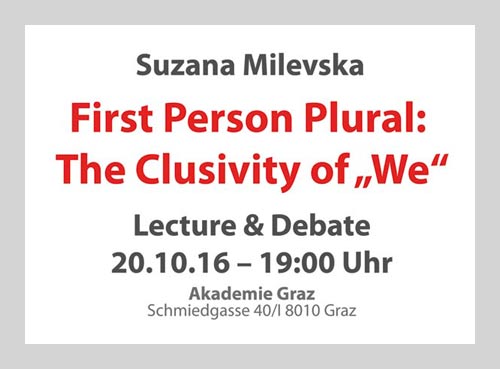 Unlike some other and mostly non-European languages, the English language does not allow an exclusive form of the first person plural pronoun (a precise differentiation in grammatical terms between all inclusive “we” and “we” that excludes some of the addressees) so I want to argue that the use of this statement should be questioned depending on the context and position from which it is uttered. It is clear from the outset that the phrase is meant to be a rhetorical self-identification with the “other” and it is supposed to express solidarity and compassion with the people who are put in a position of “secondary” citizens from diasporic and other communities (e.g. homeless, travellers, Roma, legal or illegal immigrants, or refugees) and do not have access to all rights as the other citizens although they are entitled.

Ever since Hannah Arendt entitled her essay “We Refugees” (1943) it became very common to use such a “self-inclusive” and “all-inclusive” phrase in texts that address issues as identity, collective identity and critical views towards the political differentiation between different peoples. However I want to argue that there is a certain concealed privilege, exclusivity, appropriation and a patronising position in this “we” so who is entitled or not to utter the “we” is one of the major issues and this has nothing to do with the ethnic, national or class background (the risk of essentialisation lurks behind any exclusivity).